Do we really need ruby characters all the time?

Currently, the policy concerning ruby characters is not clearly stated leading in a lack of consistency in their usage.

Answers in English tend to have a lot of ruby even on common words. Indeed, adding ruby ease the reading but at the same time it is not always desirable. I even think that adding too much ruby do more harm that not adding them.

The very first reason is very pragmatic. Adding ruby takes time since we need to write the same thing twice. Thus, adding ruby is a burden to the writer.

Second, eyes tend to be attracted by the ruby more than by the character. I think that this is really harmful because if we pay more heed to the ruby than to the character the learning process of the character is badly impacted. Moreover, even if we know the reading of the characters, too much ruby will eventually dulls our skills. Because there is no point knowing the reading if those readings are always shown.

Therefore, I would suggest that we agree on a set of rules concerning ruby. I propose the following initial set of rules and I would like your opinion on them.

The first rule seems capital to me, after all we are free to write whatever we want as long as it is useful. Rules 2. & 3. are more addressed to edits, if we see an uncommon word, a word with an irregular reading or a rare character then we should suggest an edit. But in all other cases, I think it is better not to add to many ruby.

I agree with your guidelines, but I think that it's sometimes OK to suggest ruby on answers to beginner's questions. If I write an answer for an absolute beginner I often try to use kanji anyway, but add ruby. But sometimes I might not and it would be fine for someone to add ruby in a suggested edit.

That said, I think we should discourage users to methodically go through posts and add ruby as they browse the site, because that would eventually lead to stepping on people's toes making the edits disruptive rather than helpful.

You can scroll to the bottom of the page to access this configuration option: 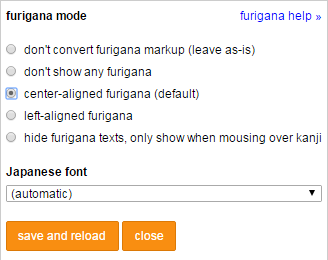 10
Furigana engine update for December 2015
8
The state of browser support of Furigana, and bottom-aligned Furigana
0
Answers with japanese words written just in kanjis
3
Any option to disable 振仮名?

3
More tags for themes…
6
Sought after answers: practical or not?
3
Comment are not a substitute for chat rooms
20
Google counts may not be as reliable as you imagine
8
Furigana engine: modified version with various bugfixes, added features
4
Are comments that come off as condescending or generally abrasive and unwelcoming against the rules?
12
Furigana engine update
8
The state of browser support of Furigana, and bottom-aligned Furigana