The state of browser support of Furigana, and bottom-aligned Furigana

As a follow-up to Do we really need ruby characters all the time?, I think there could be some discussion in regards to the rendering of the Furigana engine:

I believe the goal of reducing clutter could be substantially achieved by adding an option to display Furigana under rather than over the text. In fact, I think it may be a good idea to make such an option the default Furigana mode for this site.

As has been mentioned in the linked post above, eyes tend to be attracted by the ruby more than by the character when the Furigana is above the text, but if it's under it, I believe it's less intrusive and allows one to focus on the main Kanji before focusing on the Ruby (screenshot examples below).

The state of Webkit/Blink Ruby:

Webkit/Blink (as used in Opera, Chrome+Safari) all support Furigana natively, both under and over the text, and seem to render it quite well.

The state of Firefox Ruby:

Firefox now has native support for ruby, both under and over the text, but I personally don't like its rendering. It renders the Furigana quite far apart from from the text with a lot of padding. It doesn't seem there's currently anything that can be done about this, in CSS or otherwise.

I believe this would considerably increase the clutter on the site to the point where it would be worse to use native Firefox ruby than the present hacks.

One thing that's interesting is that if the Furigana is under the text rather than over it in the "hack" mode, it seems to cease having as many vertical alignment issues, and removes the need for calculation hacks that are required when Furigana is over the text in hack mode.

The state of Internet Explorer Ruby:

IE has reasonable support for Furigana over text, but does not, AFAIK, support Furigana under text natively. It would therefore likely be necessary to use the "hack" CSS table rendering if rendering Furigana under the text.

In my opinion, it might be better even in this browser to use the Furigana rendering below the text with the "hacks", as it seems to render OK (for me at least).

How does everyone about feel about this. Should we use native Furigana rendering in Firefox even with the spacing?

Should we keep the current behaviour of displaying the Furigana above the text, or should we make the default rendering mode Furigana below text (even in IE)?

As has been mentioned in my comment, I'm no longer in support of making bottom-aligned Furigana the default. I think that it is more usual to have Furigana top-aligned, and after adding font shrinking I believe the original goal of reducing the visual impact of Furigana will be achieved to a large degree.

Comparison of top and bottom-aligned Furigana, with and without shrinking:

There still will be the option to use bottom-aligned Furigana for people who would like to use it.

I think that, on balance and some investigation, that it would actually considerably reduce the number of bugs and inconsistencies between OSes/devices/browsers/fonts etc if "native" Furigana was never used, and there's one set of code to maintain. As it is right now, all the three major browsers have wildly differing implementations of ruby, and their implementations have issues and bugs which need to be worked around for each.

After some experimentation, I've found that using inline-block with relative positioning seems to be reasonably consistent and probably less buggy overall. This implementation may have some vertical alignment issues in rare cases, but it seems pretty good, and much less likely to be a problem than the current Firefox vertical-align hacks. Here's some screenshots of various OSes and browsers with the new inline-block rendering:

As can be seen in the screenshots, there are still some issues with the size of Furigana on Android/Chrome, as there were previously with native ruby rendering. I'm setting the font-size to be size of the surrounding text to try to combat the issue at http://chat.stackexchange.com/transcript/511?m=17474056, but I think that the translation between pixels and actual rendered font size might be resulting in calculation problems at a browser or font rendering level. I'm not sure what I can do about this at this point. ((should be mostly fixed))

There have been a number of times I've noticed people not finding the Furigana options, so I've made the link in the footer have a dashed border, made the text bolded, and added a down arrow to try to make sure people who want to alter/not use Furigana rendering know that the relevant options are there.

I've also renamed "Furigana options" -> "Japanese options" as the options control more than just Furigana: they also allow changing Japanese fonts or turn off the Japanese extensions entirely. I'm aware that "Japanese options" is not strictly speaking correct, and would technically be better as "Japanese javascript extension options" or something, however space is limited.

New options have also been added under a heading "Furigana fonts" to control the impact of Furigana: 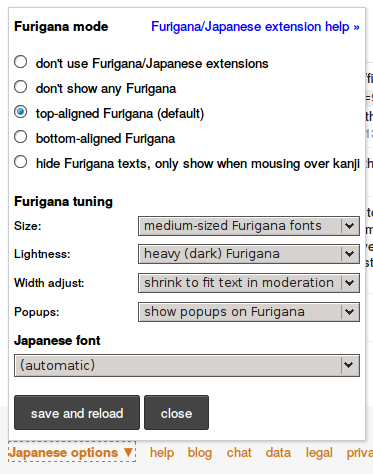 Keeping in mind that many users who use "hide furigana texts, only show when mousing over kanji" do it to reduce visual effect, I have also made the underline a lighter 2px dotted line, rather than a 1px dashed line. A before/after comparison:

If anyone thinks the new underlining is too hard to see, or has any other feedback on the changes in this post in general, please let me know.

UPDATE： After using the new version for a while, I think that Furigana is frequently hard to read when it's lighter, so I think it's best to leave it on the dark mode by default. Lighter Furigana might be better for when it's more heavily used, but I don't think Furigana should necessarily be used as much as in the examples above anyway, and when used for defining special readings/introducing words etc it's important for it to be readable.

I've also added popups to ruby, as it sometimes can be difficult to distinguish 濁点{だくてん}:

This is a test answer to check the Furigana changes are rendering acceptably.

The test at the bottom of this answer currently looks like the following screenshot to me on Firefox 42.0/Ubuntu 14.04 (I've clipped the right of the image a bit so that it isn't scaled): 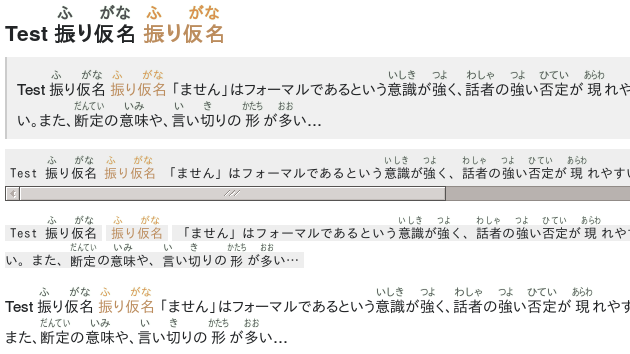 I've made it so that the text color of the Furigana is slightly lightened to reduce its impact.

I've also added a very light 0.12 opacity 1px green text-shadow halo so that it stands out just enough to be different, while (hopefully) not being too overt. It might look slightly different on some monitors, if anyone feels it's too strong etc please say so.

7
Do we really need ruby characters all the time?
10
Fix furigana on the mobile version of our page
9
Furigana engine update for December 2015

24
Is it possible to add support for Ruby tags or any other mechanism for Furigana?
10
JL&U Hacks - Ruby Rendering
7
Furigana engine: modified version with various bugfixes, added features
11
Furigana engine update
10
Fix furigana on the mobile version of our page
9
Furigana engine update for December 2015
5
Explicit rule about including source material or references