Question: I need to distinguish between single-storey 'ɑ' and double storey 'a' in italic IPA text, but the font doesn't allow it.

Answer: This can be addressed using font features.

This overview explains what font features are and what each feature does. (The feature that will allow you to display an italic 'a' is number 1053 - Slant Italic Specials.)

This page explains how to activate font features in various applications/operating systems.

I guess Andika was put first, because it is a sans-serif font with a weight similar to Arial/Helvetica, our main text font (until we get our own design, which should be quite soon). Compare 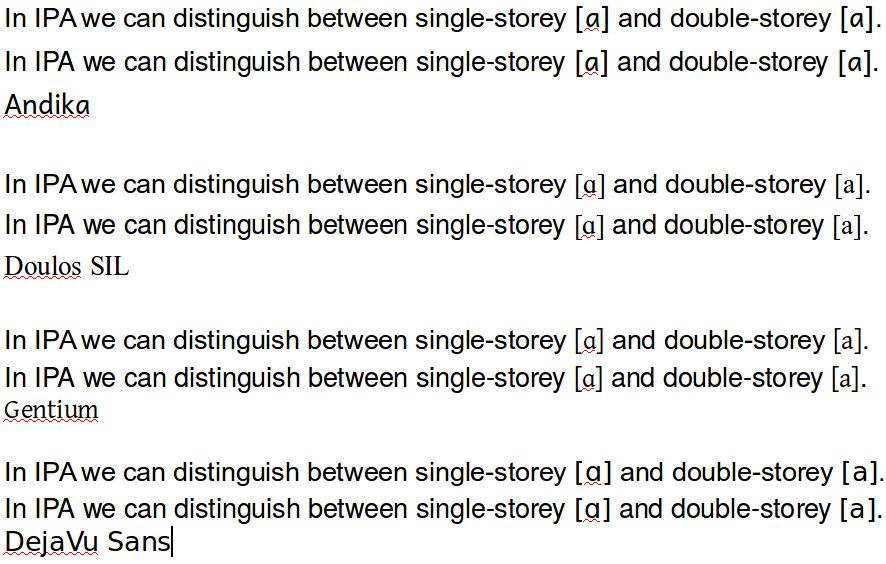 The first line is Arial and the second line TeX Gyre Heros (to emulate Helvetica, which I don't have on this machine).

I would support a change that helps distinguish a and ɑ, but (hopefully) by the time this would get implemented, we already have a new body font. I assume the new design will use a sans-serif font (to pair with a Japanese Gothic font), but maybe it will be lighter, so that pairing with Gentium might actually look reasonably good:

This is Open Sans (as used on https://graphicdesign.stackexchange.com/)

On the feasibility of font-feature-settings solution

As I tried with the latest version (ver 5.000 at the moment) of Andika and other SIL fonts on Firefox 45.0.2, I have found the font-feature-settings property does work but has its own limitation due to font implementations.

According to the documentation attached to the fonts, SIL's Latin fonts have a "literacy alternate" feature that toggles printed or script a and g shapes to be displayed. The switch is represented by litr in Graphite (SIL's own font feature set) ID and ss01 in OpenType ID.

You can set a stylesheet rule:

to disable handwriting variation in Andika.

However, the Graphite features are only supported on Firefox among major browsers (and even on the latest version of FF, it is temporarily disabled by default due to security concern, they say). Therefore, in order to apply the same effect on other browsers, you must use OpenType equivalent,

But the problem is, if you flag the feature when Graphite is disabled, the non-default shape seems always to be used, that means it shows you double-story a for Andika but single-story a for all other SIL fonts in turn. So far, I'm not sure if it's a technical restriction or a bug.

Another concern is it may have unwanted side effects on other fonts, since ss01 is a vendor-specified (i.e. private use) slot that allows custom use. For example, Segoe UI actually assigns some stylistic variations to it. 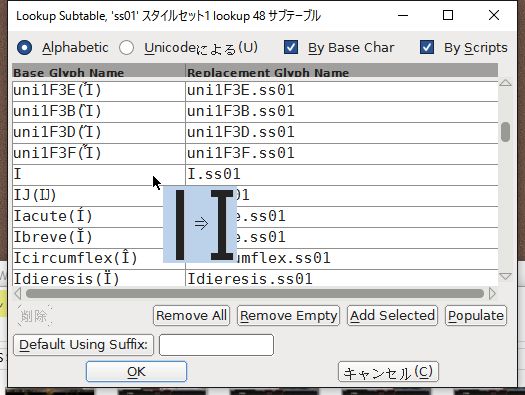 As for Google Chrome..., well it didn't recognize SIL fonts other than Charis SIL and Doulos SIL :D

Not the answer you're looking for? Browse other questions tagged bug furigana .