If I input "niji" the option just doesn't show up.
I added it as a custom word in the IME dictionary, but it still doesn't show up.
I have to write "futaji" to get "二時".
Is there a way to make it so "niji" gives you "二時" as an option?

Just to be clear, the below is all about using the Microsoft Japanese IME that comes in Windows 10. Different versions of Windows IME should work similarly, but I have no idea about third-party IMEs such as ATOK.

Here's what I see when I change to Japanese input mode and type niji: 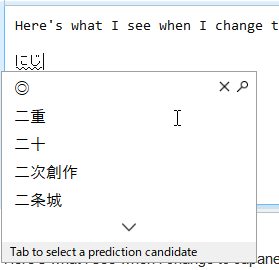 Remember -- you also have to hit the spacebar to tell the IME that you want to convert. That initial pop-up is the IME's attempt at predictive completion. It doesn't convert anything until you hit the spacebar.

After you hit the spacebar, the current kana string (with the squiggly underline) changes to whatever the IME has as its first conversion candidate. In my case, the kana are にじ, and the kanji it changed to is 虹, since that was the kanji I've apparently chosen either most often, or most recently (I forget which), as the conversion for the kana にじ. When I hit the spacebar again, I get a pop-up showing all the conversion candidates: 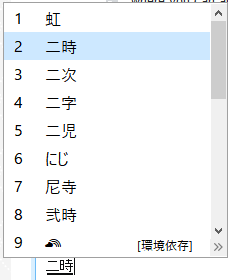 If this is what you're doing, and you don't see 二時 anywhere in the list of conversion candidates, something is seriously wrong with your IME configuration. Any fix of that is beyond the scope of this answer.

Not the answer you're looking for? Browse other questions tagged discussion questions .

5
Could/should there be a way to write and save a draft of a question?
7
Furigana engine: modified version with various bugfixes, added features
1
How do I type hiragana on Microsoft Word using the roman alphabet on my keyboard (it types a hiragana symbol per key instead!)
11
Improved IME Handling, re-enabling Enter to submit
5
Is there an open source / public domain Japanese dictionary that can used in a software IME?
2
Any way to get English translations into the dictionaries Windows IME uses?
1
Specific kanji not showing up as suggestions on Windows IME